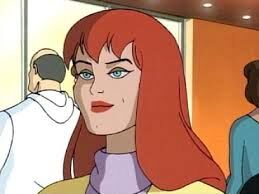 Mary Jane Watson is the girl-friend of Spider-Man.

When she was little, Mary Jane and her mother were constantly abused by her father, before he walked out on them. Consequently, Mary Jane was raised by her Aunt, Anna Watson. Mary Jane once dated Morris Bench but later split up with him.

Mary Jane first met Peter Parker through a blind-date set up by her Aunt Anna and Peter's Aunt, May Parker. The pair began to date, despite some initial competition from Felicia Hardy. Mary Jane was later harassed by Eddie Brock, who had become Venom and learned that Peter was Spider-Man. Later, Mary Jane unknowingly kissed the Chameleon, who was disguised as Peter at the time and was trying to escape the Daily Bugle.

Morris Bench re-entered Mary Jane's life again, when he became 'Hydro-Man'. Fortunately, Peter (as Spider-Man) managed to save Mary Jane from the villain. Feeling neglected by Peter, Mary Jane began to date Harry Osborn. After meeting up with her father, who had been missing for years, Mary Jane mysteriously vanished. Peter later found her in a cult being brainwashed by Baron Mordo. Mordo had placed illusions of Mary Jane's dad to her, making her believe that she was reunited with him. Spider-Man teamed up with Doctor Strange and Wong to defeat Mordo and Dormammu.

When Norman Osborn became the 'Green Goblin', he kidnapped Mary Jane, Anastasia Hardy, Wilson Fisk and J. Jonah Jameson but Spider-Man managed to defeat the villain and rescue them all. When Peter was framed for stealing Government secrets, he escaped prison to see his Aunt May, who was in hospital. Mary Jane disguised Peter as a doctor but the two were captured by the Chameleon. Daredevil and NYPD Detective Terri Lee freed the two.

Mary Jane and Harry later became engaged and, during a presentation, the pair and Norman were kidnapped by Alistair Smythe and imprisoned by the Kingpin. Spider-Man later freed them all but Mary Jane broke off her engagement to Harry, realising she still loved Peter. Peter and Mary Jane began to date again, driving a wedge between them and Harry.

It appeared that Mary Jane returned to New York, having found a way out of Limbo, but she was later revealed to be a clone. After Spider-Man fought in the Spider Wars, he and Madame Webb went off to find Mary Jane, who was still stuck in Limbo.

In this universe Peter Parker never dated Mary Jane and instead married Gwendolyne Stacy. Spider-Man, visiting this world, met Mary Jane and was surprised to see she hadn't met him.