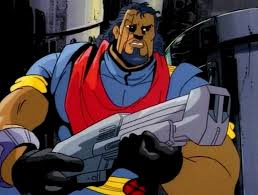 Lucas Bishop is a mutant tracker from a future ruled by Sentinels.

In the 'Days of Future Past' timeline, Bishop was a mutant who worked for the Sentinels, who ruled America at this time, helping them to track mutants and exterminate them. Bishop helped to bring in an aged Wolverine and two other mutants but the Sentinels with him at this time said that Bishop had filled his quota and so the tracker was captured as well. Bishop, Wolverine and the other two mutants fought the Sentinels and Bishop and Wolverine managed to escape to see Forge. Forge sent Bishop back in time to stop the incident which made this future come to pass.

Bishop arrived during the X-Men's time and suffered from amnesia at first. In his confused state, Bishop thought that he had to kill all the X-Men but, after a brief confrontation with the team, Bishop realised that in fact he sent back in time to stop Gambit. In Bishop's future, Gambit had assassinated Senator Kelly and this set events in motion which would lead to the Sentinels gaining power.

However, when Bishop arrived he found that his world was still a dystopian place but another incident had caused this disaster. Bishop was again sent back in time to stop Apocalypse's man made virus from decimating the world. However, Cable arrived from even further in the future, determined to stop Bishop as his actions had erased Cable's timeline. After some confrontations, Cable used Wolverine's healing factor to create anti-bodies for the plague, which benefitted both time travellers.

Bishop later travelled back in time with his sister Shard and alternate versions of the X-Men, Wolverine and Storm, who were from a reality where Professor X was assassinated in his youth. The mutants managed to prevent Fitzroy from assassinating Xavier in the 1950's and the mutants returned to their respective times.

Bishop fought Apocalypse again, when he and other time travellers were pulled together to combat the ancient mutant once and for all. This confrontation left Apocalypse stranded in the Astral Plane. Bishop once again went back to his own time.