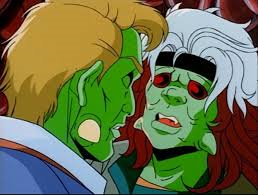 This is the tenth episode of the fourth season of X-Men: The Animated Series.

A giant creature, resembling a whale, crashes from space onto Earth, just behind Wolverine, who is meditating. He goes to investigate the crash and finds himself encountering the Brood. Elsewhere, at Xavier's Mansion, Rogue relaxes in her room when she gets a visit from Gambit. Just then, she gets a call from Cody Robbins, who has woken from his coma that Rogue put him in when they kissed, and wants to meet up with her in Manhattan.

Meeting up with Cody, he tells Rogue that he has found a way for them to touch without Rogue's powers affecting him. Rogue passes out and when she awakes, Cody asks her to go on a weekend away with him. Rogue flies back home to tell the others that she will be away.

In the desert, Wolverine searches the creature that the Brood came out of and finds out they plan to take over the planet by infecting all the population with parasites, turning them into reptiles. He manages to contact the rest of the X-Men who get ready to set off when Rogue arrives and tells the team that she is going on vacation, despite Wolverine's situation.

It is revealed that Cody was working for the Brood all along and was leading Rogue into a trap. She reunites with the team in the desert, just as Wolverine begins to change reptilian, having been infected. Cody and Rogue start to change as well, and the Brood Queen reveals that she just planned to only recruit her. However, Wolverine is revealed to have survived the infection intact, due to his healing powers, and he allows Rogue to absorb them so she can cure herself. The rest of the X-Men there are cured and Professor X telepathically talks with the giant whale the Brood were using and it lets out a high pitched squeal to defeat the Brood while the team retreat.