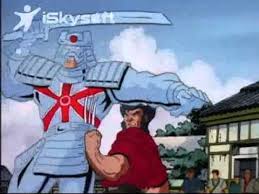 This is the ninth episode of the fourth season of X-Men: The Animated Series.

Wolverine is undergoing a therapy session with Professor X, trying to get to the root of his anger problems. Becoming frustrated with the lack of effective treatment, Wolverine announces that he is leaving the X-Men to travel to Japan. Wolverine arrives in Japan and meet Oku, a monk who teaches Wolverine on calming his anger through meditation.

Wolverine settles into his new life in Japan, making friends with a village girl named Kisara, although her brother Soichi scuffles with the mutant. Wolverine however, manages to maintain his calm. When going out into the neighbouring woods, Wolverine encounters the Silver Samurai, who warns Wolverine not to mess with his plans. Straight after he leaves, Japanese mobsters arrive in the town, demanding protection money from the locals who say that they can't pay. After Soichi gets angry, Silver Samurai raises the payment to double the usual rate and gives them two days to pay. After setting the temple on fire, the mobsters leave. Wolverine, trying to remain calm, considers going after the mobsters.

Meanwhile, Jubilee arrives in Japan, looking for Wolverine. At the village, Wolverine decides to help the villagers and they set traps for the villains, who are riding through the forest. Some mobsters manage to get back to the village, but most are dealt with by the villagers. The Silver Samurai arrives though and Wolverine steps up to fight him. The two fight and Wolverine manages to defeat the Samurai. He then agrees to go back home with Jubilee, who finally finds him.