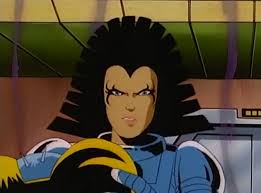 Lilandra Neramani is the Empress of the Shi'ar Empire.

Whilst her brother, D'Ken Neramani, was the Emporer of the Shi'ar, Lilandra stole the M'Kraan Crystal from him and escaped to Earth. Once there, she found Professor X and sought out his help. Lilandra was kidnapped by Juggernaut and Black Tom, who were working for the Shi'ar enforcer, Erik the Red. Due to timely intervention from the X-Men, Banshee and the Phoenix, Lilandra was saved. However, the Starjammers soon captured the M'Kraan Crystal and Cyclops, intending to hand them both over to D'Ken. The X-Men and Lilandra tried to stop them but D'Ken ended up with the crystal and abused its power, causing ramifications on Earth. Lilandra, the Shi'ar Imperial Guard and X-Men tried to stop D'Ken from destroying the universe but, ultimately, it was the Phoenix who destroyed D'Ken by flying into the Sun with the crystal.

It was soon revealed that the Phoenix had survived this apparent suicide and quickly became the 'Dark Phoenix'. After blowing up a sun and a planet, Lilandra, now Empress of the Shi'ar, decided to arrest Jean Grey and have her executed, in case her powers cause some serious damage. Professor X managed to persuade Lilandra to instead host a battle to the death between the X-Men and the Imperial Guard, with the winner deciding the fate of the Phoenix. During the battle, the Dark Phoenix emerged again and Jean managed to commit suicide to stop it. She was revived however and the Phoenix flew off into space. Lilandra and her Shi'ar forces then left.

When Xavier was shot and critically injured, Lilandra was summoned to take the Professor to the Shi'ar with her, as they have better medical equipment which could save his life. Lilandra then left with her lover, Xavier.