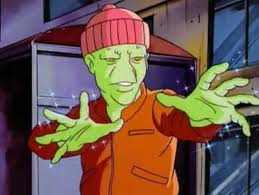 Leech is a young member of the Morlocks.

Leech lured Cyclops and Jean Grey down to the sewers where the pair were captured by the Morlocks. Leech later briefly took away Scott's power as a thank you for trying to save him from a human mob. Later, Leech and the other Morlocks were captured by Lady Deathstrike and the Reavers. Leech was almost killed but the X-Men saved the sewer mutants and returned them to their home. During a Christmas Eve, Leech became critically ill and the X-Men were sought out by the Morlocks in order to help the young mutant. Wolverine gave a blood transfusion to Leech, which briefly gave the young Morlock the X-Man's regenerative ability and abled him to cure himself.