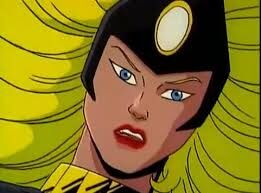 Darkstar teamed with a group of former Soviet generals who wished to bring the Soviet Union back to power. She helped bring Russian super solider, Omega Red out of cryogenic stasis. However, when she saw the destruction that Omega was causing, Darkstar switched sides and worked with the X-Men and Colossus to defeat the villain and the generals.