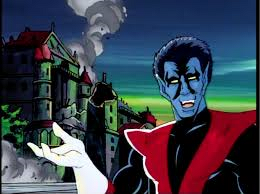 Kurt Wagner is also known as the mutant, Nightcrawler.

When he was just a baby, Kurt's mother Mystique, threw him over a bridge into a river, to save him from his father who would've killed the boy due to his devilish appearance. Kurt was found and grew up to be a monk in a Swiss chapel. Kurt was persecuted by the townspeople, who lived near his chapel, but was eventually saved by the X-Men. Kurt later enlisted the help of the X-Men when he received a letter saying that his birth-mother would be harmed if he did not come to her. When they all arrived, the group where attacked by Graydon Creed Jr and the Friends of Humanity. Kurt learned of his origins and how Graydon and Rogue were family to him. Graydon tried to kill Kurt but Mystique apparently died, saving him.

Nightcrawler is seen as part of the mutant rebellion.