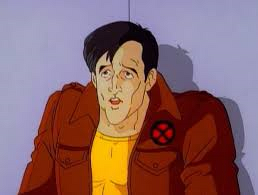 Kevin Sidney is also known as the X-Man, Morph.

Kevin Sidney was a loyal student of Charles Xavier and a member of the X-Men. He had a good friendship with fellow X-Man Wolverine, being the only person who could make the Canadian laugh. During a mission to the Mutant Control Agency's base, Kevin took a blast from a Sentinel meant for Wolverine and apparently perished. However, it was later revealed that Morph had survived this blast and was brainwashed by Mister Sinister into hating the X-Men. Morph posed as a reverend during Cyclops and Jean Grey's wedding. He then led the couple to an uninhabited island for their honeymoon where they were attacked and kidnapped by Sinister and the Nasty Boys. Morph later infiltrated Xavier's Institute where he sent Jubilee to the Friends of Humanity's base, made Gambit kiss Rogue in an attempt to kill him and sent Xavier and Magneto to Antartica where they would be trapped in the Savage Land for some time. Kevin later fought his dark personality, which Mister Sinister had put in him, and helped the X-Men free Scott and Jean before escaping Sinister and disappearing for a while.

Wolverine tried to help his old friend but Morph told him to let him be alone for some time and Kevin later arrived at Muir Island for treatment. Feeling he was ready, Morph returned to the X-Men, only to be sent on a mission to fight the Sentinels. Morph was initially frightened of the robots, as they had almost killed him, but he overcame his fear and managed to destroy Master Mold’s head with a stalactite. Morph the returned to Muir Island, deciding that he wasn't ready to be an X-Man again just yet.

When Xavier was shot by Henry Peter Gyrich on live television, mutant riots broke out all over America and Morph returned and took the form of Xavier to try and quell the rioting. He later joined the team again after this.

Morph is seen as part of the mutant rebellion.