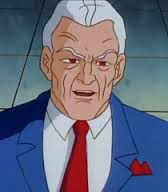 Justin Hammer is the corrupt C.E.O. of Hammer Industries.

Due to business rivalries, Justin ordered the assassination of Walter Stark, the head of Stark Enterprises. When Howard's son, Tony Stark took over the control, Justin had him kidnapped and brought to Mandarin, an event that would lead to Tony becoming 'Iron Man'. Justin has aided Mandarin a lot over the years. He allowed the villain to use his newly opened tunnel from Britain to France as a way of getting radioactive zombies to attack Britain. When Mandarin was using a robot duplicate of Iron Man, Justin sponsored Living Laser from membership in The Hand.

He once hired Ghost to steal to steal Iron Man technology, which Justin then sold to a variety of villains. This sparked the 'Armor Wars'. At the climax of the event, Justin launched the Firepower robot against Iron Man, which was eventually defeated. Justin's system was then wiped by Iron Man.