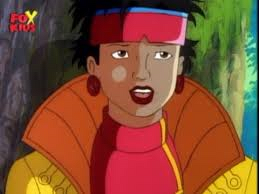 Jubilation Lee is also known as the X-Man, Jubilee.

Jubilation Lee, or Jubilee, as she prefers to be called, spent her childhood living in orphanages where she learned how to pick locks. Jubilee was later adopted by a couple and lived with them for a year before her mutant powers manifested. After her powers had developed, her foster father reported her to the Mutant Control Agency, thinking that it was the best option for the young girl. Jubilee then ran away from her foster home after overhearing this, thus she managed to avoid a Sentinel how smashed into her room, looking for her. Jubilee then went to the mall where the Sentinel tracked her but she was saved from the robot by Storm, Rogue, Gambit and Cyclops of the X-Men. Jubilee was later taken back to the mansion where she, at first, tried to escape but later began to feel safe with the X-Men. After hearing that her foster parents may be in danger, Jubilee sneaked back to their house where she was captured by a pair of Sentinels and Henry Peter Gyrich. Jubilee was taken to the Sentinel's base and interrogated by Gyrich for information on the X-Men. The X-Men later saved Jubilee and she joined the team.

Jubilee was later almost killed by Sabretooth when he tried to take over the school but Wolverine saved her. Professor X later sent Jubilee, Storm and Gambit to Genosha where the three were captured again by Sentinels. The captured X-Men along with other imprisoned mutants were forced to help build a dam and Jubilee tried to organise a break out but failed. Later, Jubilee was seemingly betrayed by Gambit, who had told the prison guards of Jubilee's escape plan. Jubilee was put into isolation with Storm but was later rescued by Gambit and the three went back home with the X-Men.

Jubilee was later developed a close bond with Wolverine, who came to be like a father to Jubilee and even taught her to drive. Jubilee was often treated like a child by the other X-Men but she later proved herself to be able to handle herself in tough situations and was seen as a valuable X-Man.