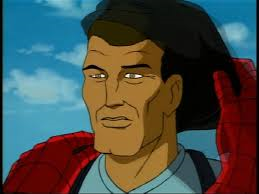 Joseph 'Robbie' Robertson is a reporter for the Daily Bugle.

Robbie was childhood friends with Lonnie Lincoln. The two tried to rob a grocery store but the police arrived and Robbie escaped, leaving Lonnie to take all the blame. Lonnie was sent to a Young Offenders Institute for a while and when he got out he wanted revenge on Robbie. Lonnie lured Robbie to a chemical plant where he planned to frame his friend in a robbery attempt. However, Lonnie fell into a vat of chemicals and was presumed dead.

In later life Robbie got a job at the Daily Bugle and got married to Martha Robertson and together they have a son named Randy Robertson. Robbie later learned that Lonnie survived the fall into the chemicals and became the super-powered albino enforcer named 'Tombstone'. Tombstone managed to get Randy in his gang but Spider-Man was able to defeat Tombstone and save Randy. Robbie was later framed and sent to prison but Spider-Man and J. Jonah Jameson, Robbie's boss, managed to find evidence that proved his innocence. Robbie attended the wedding of Peter Parker and Mary Jane Watson.

Robbie was seen alongside Jameson in this reality, being attacked by Green Goblin and Hobgoblin.

Robbie was seen at the celebratory dinner of this reality's Spider-Man.