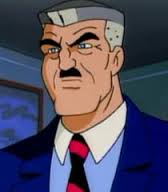 J. Jonah Jameson is the editor-in-chief of the Daily Bugle and the head of J3 Communications.

Sometime in his past, Jameson worked in the navy and was married to Julia Jameson. They had a son, John Jameson. Julia was killed by a masked murderer, leading Jameson to have a deep distrust of anyone wearing a mask. This is why Jameson constantly hounds Spider-Man. While working as a reporter for the Daily Bugle, Jameson earned himself the nickname 'Jigsaw Jameson' and published the obituary of Nick Fury, where he flipped the image so the eye patch was on the wrong eye. Jameson soon became editor-in-chief of the Bugle and started his own broadcast company, J3 Communications.

Jameson had an active role in the origin of the Scorpion. Jameson paid Farley Stillwell to use the Neogenic Recombinator on Mac Gargan in an effort to create someone who could bring Spider-Man to justice. Unfortunately, Scorpion's mind began to deteriorate and Jameson realized he had only created a villain. Jameson later fired Eddie Brock after he accused the wrong person of being Spider-Man. Jameson later gave Brock another chance when he told him that Spider-Man had stolen a substance called 'Promethium X'. Jameson offered a million dollar reward to anyone who captured Spider-Man but was later forced to retract the reward when it was revealed that Brock had used false information. Jameson later encountered Nick Fury again and participated in the S.H.I.E.L.D. operation to bring the Chameleon in.

Jameson, as a stockholder of Oscorp, was kidnapped by the Green Goblin and later rescued by Spider-Man. When Peter was framed with treason, Jameson secretly hired Matthew Murdock to represent his former photographer. Jameson also used his 'Jigsaw Jameson' reputation to help clear Robbie Robertson's name when he was framed. Jameson later attended Peter and Mary Jane Watson's wedding and gave them a Daily Bugle van as a wedding present.

This reality's versions of Jameson and Robbie were attacked by Green Goblin and Hobgoblin.

In this reality, Jameson was the publicist of Spider-Man, whose reality as Peter Parker was revealed to all. Jameson highly supports the hero.