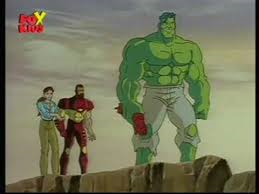 This is the eleventh episode of the second season of Iron-Man: The Animated Series.

Iron Man, James Rhodes and Julia Carpenter find Bruce Banner trapped in a light beam cage, in the desert. Julia touches one of the beams and she instantly vanishes. Iron Man finds that one of Mandarin's rings is the cause of the light beams and anyone who touches them is transported back through time. Unknown to the heroes, the Leader is spying on the situation and, already having one of the Mandarin's rings, sends his drones out to acquire the other one. Iron Man fights against the drones when they arrive but is unable to stop them taking the ring.

Now free, Banner joins the trio on a helicopter and tells them that they are going up against the Leader, his ex-lab assistant who was mutated by gamma rays. In his base, the Leader plans to use the two rings to open a portal back in time so he can kill the young Banner and be able to gain the power of the Hulk for himself. However, Iron Man and Banner arrive at the Leader's base and Banner transforms into the Hulk. Hulk grabs the ring and tries to crush but instead gets himself and Iron Man transported to the time of the Dinosaurs. James Rhodes forces the Leader to bring them both back in return for the Leader getting both of the rings.

Iron Man and Hulk are teleported to different time periods as the hero tries to tell Hulk that he needs the ring to save Julia. The Leader gathers Iron Man, Hulk and Julia and transports them to the time of the gamma bomb blast that turned Banner into the Hulk. When Iron Man suggests that Hulk save Banner from the blast, Hulk becomes enraged and starts to fight Iron Man. Using the Leader's time travel portal, James sends Iron Man's large 'Hulk-Buster' armor back to his ally so he can fight the Hulk. The Leader manages to use the portal as well to travel back to the gamma bomb incident. Julia recovers the ring but has it taken by the Leader. When the Leader prepares to shoot the young Banner, Hulk protects him so that he can become the Hulk. Back in the present, James manages to fix the portal and brings everyone back apart from the Leader. Mandarin then recovers his last two rings.