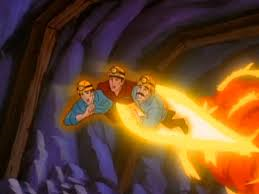 This is the eighth episode of the fifth season of X-Men: The Animated Series.

A cave-in strikes a mine in Kentucky, leading Cannonball to use his powers to save himself, his father Edward Guthrie and another mine worker. Cannonball becomes a local hero after this, which draws the attention of Government Agent, Girkland, who wants to get Cannonball to sign up with him. Beast also hears of Cannonball's rescue and tells his teammates about it. Rogue decides that she should be the one to check it out, as she is from the South as well.

Back in Cannonball's hometown, Girkland tells the locals a lie that mutants have been causing trouble on a farm two towns away. He hopes that this will get the townspeople against Cannonball so he will want to move away and join up with the Government. Rogue arrives at the Guthrie's house, introducing herself as 'Ms LeBeau', and asks if Cannonball would like to enroll at Xavier's School. Cannonball refuses as he wants to stay at home and keep working in the mines. Army men here of Rogue's discussion and find out that she is an X-Man.

After Rogue tells the X-Men what she's learned about Girkland, Professor X sends Gambit in to spy on the Government and Army presence near the town. Gambit arrives but ends up being captured and learns that the Army have mind-control technology that can control a mutant's powers, which they wish to test out on Cannonball. While Cannonball gets into a fight with some local youths, Gambit is used as a test subject for the mind control chip instead but before it can be implanted, Professor X and Beast arrive to save their teammate.

Due to Girkland's efforts, a mob marches to the Guthrie's house. Edward points them to the X-Men while Cannonball is shoved into a helicopter. The helicopter crashes due to Cannonball using his powers and robots are sent in to try and retrieve the mutant instead. The X-Men and Cannonball push back the Government's forces, forcing them to retreat and leave their plans for the young mutant.