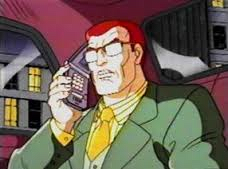 Henry Peter Gyrich was an anti-mutant agent of the government and helped set up the Sentinel program.

Henry Peter Gyrich has been known to have worked with the Federal Security Agency and the Mutant Control Agency. It was with the latter job that Gyrich was able to leak information on registered mutants to the Sentinels, who then proceeded to track and capture the mutants. It was Gyrich who ordered the capture of Jubilee and he himself interrogated her for information on the X-Men. However, the President of the United States ordered Gyrich to shut down the Sentinel operation after the X-Men had infiltrated and deleted the mutant files in the Mutant Control Agency. Gyrich and his colleague, Bolivar Trask, moved their operation to the island of Genosha, where they opened a fake hotel for mutants who were later captured and enslaved by the Sentinels and their masters. When Jubilee, Storm and Gambit visited the island and were captured, all the imprisoned mutants rioted and broke free from confinement and, with the help of Cable, Gyrich's operation was almost destroyed. Gyrich and his team later moved back to America where the giant Sentinel producer Master Mold took control of the Sentinels and planned to replace the leaders of the world's brains with computers. Gyrich told the X-Men the location of the Sentinels base in order to stop the rogue robots. Gyrich later spoke on live television about his anti-mutant views and shot Charles Xavier. He did not kill him but left the X-Men's leader critically injured.