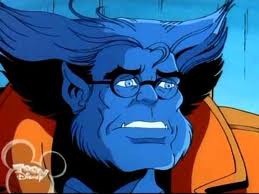 Henry McCoy is also known as the X-Man, Beast and is one of the founding members of the X-Men.

Henry 'Hank' McCoy grew up with his family and a mutation that initially only left him with larger than average hands and feet. Hank, who has had a passion for science since he was a kid, developed a serum which he thought would remove the mutant genes from his body. Instead, the serum enhanced Hank's mutation and left his with blue fur all over his body and an animal like appearance. Hank later joined the first incarnation of the X-Men and took the codename 'Beast'. Hank has stayed with the team throughout its changes, never leaving it. He also designed the 'Danger Room', where the X-Men physically train for their missions. Hank is known for his love of literature and often quotes phrases from the books he has read.

During an infiltration mission into the Mutant Control Agency's base, Hank was captured by the Sentinels and placed in jail. Hank used this opportunity to improve mutanity's position in society, through his trial, and so rejected Magneto's offer of a jailbreak. Hank was later freed from prison after Senator Kelly was rescued by the X-Men from Master Mold and his sentinels.

Hank also worked as a medical examiner in New York, where he fell in love with one of his patients, Carly Crocker, who was blind. Carly's father was anti-mutant and didn't like the idea of Hank operating on his daughter. When the Friends of Humanity kidnapped Carly, Wolverine and Beast teamed up to save her. Beast then made the hard decision of not seeing Carly again as it was too dangerous for her.

Hank's old colleague, Herbert Landon, had continued Hank's previous research for finding a cure for mutants, using the resources of the Brand Corporation. Beast directed Spider-Man, who was suffering from a neogenic disease, to Landon in the hopes that he could help the hero. Landon was in fact, trying to eliminate mutants and he kidnapped Hank to use as a guinea pig for his mutant killing serum. Hank was rescued by Spider-Man and Wolverine, and when Landon turned into a rampaging, mindless mutate, the X-Men and Spider-Man teamed up to stop Hank's former friend.

When Hank's team mate, Jean Grey, came under the influence of a maddened Phoenix Force and became the Dark Phoenix, he developed devices which helped to stop the Phoenix and bring it under control. Hank also later upgraded the X-Men's plane, the Blackbird, so that it could travel in space. Furthermore, Hank also helped to halt the Phalanx invasion by figuring out the right electrical current could defeat the aliens. Hank was present when his team leader Charles Xavier, was taken away to the Shi'ar for medical attention and so left the X-Men.

Beast is seen as part of the mutant rebellion.