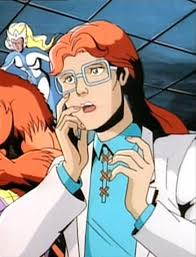 Heather Hudson is the wife of Vindicator.

Heather and her husband James, found the feral Wolverine, just after he had escaped from Weapon X. The couple took Logan in and helped him to recover. At this time, Logan expressed romantic feelings towards Heather but she stayed true to James. Heather and James got Logan to join Alpha Flight, but the mutant didn't stay in the team long and soon left for the X-Men. Years later, Heather, James and General Chasen lured Logan back to Canada, where Alpha Flight would bring the mutant to be analysed by Department H. When the examining was hurting Logan, Heather pleaded for it stop and she quit her job in protest. Logan was later freed by the other members of Alpha Flight, once they learned the truth.