Have Yourself a Morlock Little X-Mas 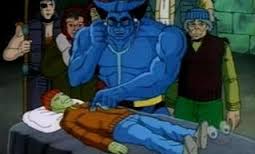 This is the eleventh episode of the fourth season of X-Men: The Animated Series.

In Xavier's Mansion, Cyclops, Rogue and Jubilee are decorating their Christmas tree while Jean Grey and Gambit are in the kitchen, preparing Christmas dinner. Jubilee, Storm and Wolverine go out to buy some last minute essentials for Christmas. The three go ice-skating after finishing shopping anits at this point that they witness an ambulance crash. They go to investigate and find some Morlocks pillaging it. A small fight ensues but it stops when the three X-Men learn that Leech is dying and needs some medical supplies. They all then go down to the Morlock's sewers to visit Leech.

Wolverine gives Leech a quick examination but he says that he doesn't think the Morlock will last long. The mutants decide to give Leech a transfusion of Wolverine's blood, to see if he will inherit his healing powers. The transfusion is set up while the X-Men continue to bicker at the X-Mansion. Marianna gives Jubilee a tour of the Morlock's living area and the young X-Man begins to feel sorry for the mutants, as they have very little for Christmas.

As the rest of the X-Men arrive, Leech is cured from his disease and Storm decides to give leadership of the Morlocks back to Callisto. The X-Men decide to have Christmas dinner with the Morlocks, which annoys Jean and Gambit, who had been working hard on their dinner.