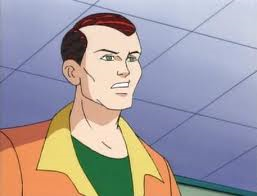 Harry Osborn is the son of Norman Osborn and was the second Green Goblin.

Harry was raised by Norman and attended ESU. He was friends with Flash Thompson before becoming room mates with Peter Parker. Harry was kidnapped by Hobgoblin and brought to the Kingpin but was later saved by Spider-Man.

Harry became attracted to Peter's love interest Mary Jane Watson and when she left Peter, the two began dating. The couple became serious but MJ left Harry when she realized that she still loved Peter. When Norman was presumed dead and the Green Goblin started kidnapping OsCorp board members, Harry was suspected of being the villain. However, it was revealed that Norman was in fact the Green Goblin.

After Norman/Green Goblin and Mary Jane became lost in limbo, Harry started to hallucinate his father. Finding out about his father's alternate identity, Harry subjected himself to Goblin Gas and became the second Green Goblin. Harry was defeated by a joint effort from Spider-Man and Punisher and sent to Ravencroft after Mary Jane seemingly returned. Hearing of Peter and Mary Jane's wedding, Harry broke out of Ravencroft and attacked the ceremony as the Green Goblin. Harry almost forced MJ to marry him before Liz Allan revealed her feelings for Harry. Dazed, Harry left the wedding with Liz.

Harry was seen attending the party of this universe's Spider-Man, who's identity is publically known.