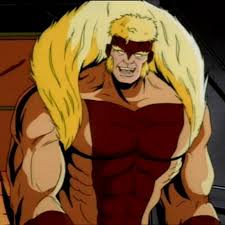 Graydon grew up with his abusive father, Jebediah Creed who used to continuously beat Graydon as child. This beating would slowly turn Graydon against humanity and most other people. Graydon, taking the codename 'Sabretooth' joined the Weapon X facility's team, Team X along with Silver Fox, Maverick and Wolverine who became good friends with Creed. The team worked together for a while until Creed killed some of Logan's friends for no reason and Logan left the team.

Sabretooth was later shown on television before he attacked Beast's trial and was knocked unconscious. Sabretooth was taken back to the X-Men's mansion by Logan, who was now a part of the team, and Cyclops. Logan protested against his old enemy staying with the team but everyone shunned Logan's claims. Charles Xavier tried to help Creed battle his inner demons but it was later revealed that Creed was sent by Magneto to infiltrate the school and take over. Sabretooth almost killed Jubilee but Wolverine managed to stop him and Creed escaped the mansion.

Creed later tracked Wolverine the Northern Canada and tried to kill his old enemy. Sabretooth even kidnapped an Inuit tribe Logan had been staying with but they were saved and Sabretooth was knocked down into a deep chasm and disappeared for a while.

When the Team X members briefly reunited, Sabretooth's past and childhood experiences were uncovered. Creed later formed an alliance with Apocalypse but was captured by the X-Men again but he later escaped. A few days later that his son is alive and found out he was the Friends of Humanity. The FOH Leaders send him to Sabertooth to be Punished.

Sabretooth is seen as part of the mutant rebellion.

Sabretooth was a servant of Magnus the Magnificent (Magneto) in Jubilee's story. He fought against Jubilee, Logan the Troll (Wolverine) and Gambit.