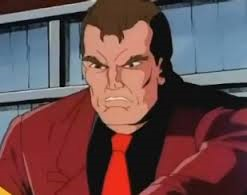 Graydon Creed Jr was the founder and former leader of the anti-mutant group, Friends of Humanity.

Graydon Creed Jr is a human, despite being the child of Sabretooth and Mystique. His neglect from both his parents lead Graydon to be severely anti-mutant and lead him to found the Friends of Humanity. Graydon lead the group against mutants as well as those who associated and helped the species. Graydon lead an attack on President Kelly's inauguration by a FOH member disguised as a mutant. Later, Graydon enlisted the help of a disguised Apocalypse to create a plague that would seem to originate from mutants. However, Graydon was infected himself and Apocalypse revealed his true form and refused to help the human. Graydon eventually recovered but was found out by Wolverine to be the son of Sabretooth. Graydon was kicked out of FOH after they found this out.

Near to madness, Graydon found out that his whole family were mutants. Graydon kidnapped Mystique and forces her to send a letter to her other son, Nightcrawler. Nightcrawler gets the help of Rogue and together they are almost killed by Graydon. However, his plan fails and Graydon is then delivered to his father's home.