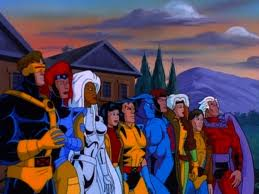 This is the tenth and final episode of the fifth season of X-Men: The Animated Series.

At a press conference, Henry Peter Gyrich tries to push forward a 'Mutant Containment Bill' and spread anti-mutant hatred throughout the country, Professor X, already ill from continuously fighting this legislation, arrives to oppose Gyrich's statement. Gyrich, thinking that Xavier is a mutant, shoots his political enemy with an energy disruptor, causing the Professor's powers to spin out of control and put himself in a coma. The X-Men get Xavier onto the Blackbird where Beast examines his body and reveals that their leader is fighting to stay alive.

Cyclops contacts Moira MacTaggert to see if she can help Xavier but she says that he is beyond her help. The team think about contacting Lilandra Neramani but are unsure of how to reach her. Meanwhile, mutant uprisings spread across the world after the shooting of Xavier sparks anger in the mutant community. Magneto is chosen to lead the angered mutants against the humans and so he calls them all to Genosha. Morph assumes Xavier's form and tries to calm down the mutant rioting through a televised broadcast, but he fails to do so. The X-Men decide to attack Magneto on Genosha, to stop Xavier's dream from dying. Cyclops, Jean Grey and Wolverine travel to the now mutant-dominated island.

The three X-Men make it to Genosha and fight Magneto but this is halted when the villain learns about Xavier's true condition. Jean suggest that Magneto use his powers to augment Xavier's so that they could contact Lilandra. Magneto is unwilling to at first, as he will be giving up his newly-amassed army, but agrees to go out of respect for Xavier. They travel back to the mansion, where Magneto helps Xavier to send a psychic message to Lilandra. Xavier wakes up from his coma and says his goodbyes to the team. Lilandra arrives and says that Xavier will be able to live but only if he stays under Shi'ar care. Lilandra then leaves with Xavier, leaving the X-Men and Magneto on Earth.