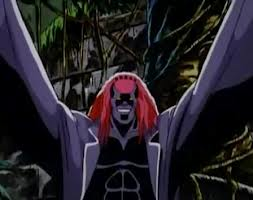 Gorgeous George was first seen kidnapping Cyclops and Jean Grey for Mister Sinister. He later fought the X-Men, along with the other Nasty Boys, but had to retreat when Sinister was seriously injured. George later kidnapped Jean again and fought the X-Men again, alongside the Savage Land Mutates but lost. George and the other Nasty Boys later helped Apocalypse gather powerful psychics that the villain was in need of.