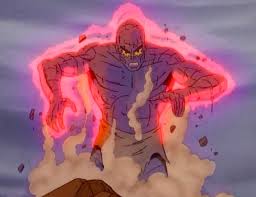 Garokk is an ancient villain from the Savage Land.

Centuries ago, Garokk ruled over the Savage Land until the High Evolutionary fought and defeated Garokk, placing his soul in a statue.

Years later, when the X-Men fought Mister Sinister in the Savage Land, Storm's elemental essence reawakened Garokk. The ancient villain managed to influence Zaladane into serving him, who in turn influenced Sauron into doing her bidding. Sauron led Storm and the X-Men back to the Savage Land and Garokk managed to mentally control Storm. Emerging in a new, giant body out of a volcano, Garokk fought against Sauron, who felt betrayed by the ancient. Garokk ended up defeated and turned back into a statue again.