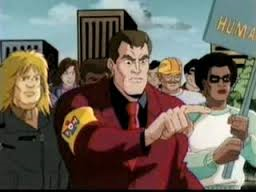 The Friends of Humanity are a group of anti-mutant protestors who organise riots and violently attack mutants.

The Friends of Humanity became known after Robert Kelly became President. The group faked a mutant attack at his inauguration and helped to start anti-mutant riots across America. The later helped to spread a 'plague' which had been manufactured by the group and Apocalypse. The group blamed the plague on mutants but were found out by the X-Men. Thanks to Wolverine, the group found out that their leader Graydon Creed Jr was the son of the mutant Sabretooth. Creed was then kicked out of the group.