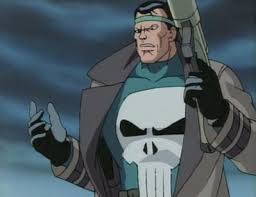 Frank Castle is also known as the anti-hero, the Punisher.

Frank Castle became the Punisher after his family were shot to death by unknown mobsters. He later met his technical support, Microchip and gained a vast arsenal, including a remote control, weaponised van.

When Spider-Man was believed to have kidnapped Morbius from his hospital bed, Castle made it his mission to stop the hero and save Morbius. Castle fought Spider-Man until the wall-crawler succumbed to his genetic mutation disease and turned into the 'Man-Spider'. Punisher continued to pursue the Man-Spider, until Sergei Kravinoff stopped him and persuaded Castle to work alongside him and Mariah Crawford to try and find a way to cure Spider-Man of his disease. The group finally managed to give Man-Spider the cure and turn it back into Spider-Man.

Castle later encountered Anna Watson, who told the anti-hero about the disappearance of her niece, Mary-Jane Watson. Castle started to investigate Mary-Jane's boyfriend, Peter Parker (not knowing he is Spider-Man) and came to the conclusion that he was the Green Goblin. However, he soon released that Harry Osborn was in fact the Goblin, although Norman Osborn was the Goblin that lead to Mary-Jane's disappearance. Mary-Jane seemingly returned and the Punisher left once again.

Mojo once used a robot replica of the Punisher to fight the X-Men.