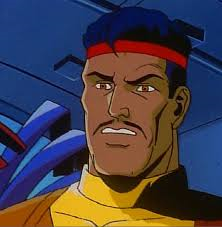 Forge is a member of X-Factor and an ally of Bishop.

When the X-Men and Iceman first came across X-Factor, Forge suggested to Professor X that the two teams have a friendly skirmish. He, and the rest of X-Factor, later watched Magneto's speech. When the Phalanx were threatening Earth, Forge allied with Beast, Magneto and Mister Sinister to stop the alien force. At some point, Forge lost his leg and replaced it with a mechanical one.

Days of Future Past[]

In the future run by Sentinels, Forge was put of the mutant resistance, along with an older version of Wolverine and he sent Bishop back in time to stop the assassination of Senator Kelly and therefore stop the Sentinels from coming to power.

When Bishop returned to the future, having helped to halt the Sentinels taking power, he was greeted by forge from a reality where Apocalypse had created a virus that decimated the world. Bishop was again sent back in time by Forge to halt the virus.

Bishop then returned to a timeline where, Xavier had been assassinated in his youth and so Magneto had formed the X-Men. However, there had been failure to strengthen human/mutant relationships and a war occurred, leading to another desolate timeline. Forge's whole body, apart from his head, had been replaced with mechanical parts. Reluctantly, Forge sent Bishop, Shard and the Wolverine and Storm from this timeline to prevent Xavier's assassination.