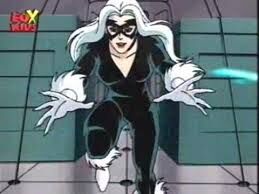 When Felicia was very young, her father, John Hardesky, was arrested by S.H.I.E.L.D. and Felicia was told that her father simply just left. Raised by her mother, Anastasia Hardy, Felicia was brought up in a wealthy upper-class household and later went on to attend ESU. Felicia had to contend with the romantic advances of Peter Parker, with Felicia only wanting him to tutor her.

Felicia later went on to date Michael Morbius until he was accidentally transformed into a vampire-like creature, forced to drain plasma from others to survive. Felicia was left heartbroken after this but soon found comfort in the arms of Jason Macendale Jr. Unfortunately, Jason turned out to be the Hobgoblin and was planning on using Felicia to get at the riches of the Hardy Foundation. Felicia then started to become attracted to Spider-Man, unaware that he and Peter Parker are one and the same.

When Kingpin managed to free John Hardesky from S.H.I.E.L.D., he forced Hardesky to reveal the super soldier serum used to create Captain America. Kingpin then used Felicia as a test subject for the serum, giving her powers that could be controlled through a ski mask. Felicia took the name 'Black Cat' and teamed with Spider-Man to free Hardesky and stop the Kingpin. Hardesky was then put back into S.H.I.E.L.D. custody and Black Cat became a regular ally to Spider-Man. This ended when Morbius returned and Black Cat left with him and Blade to fight vampires.

Felicia returned to New York to attend the wedding of Peter Parker and Mary Jane Watson. When the wedding was crashed by Green Goblin and Scorpion, Felicia suited up as Black Cat and fought alongside Spider-Man to stop them. Spider-Man later chose Black Cat as one of his allies in the Secret Wars. At first Black Cat was angry with Spidey for taking her without her permission but she later forgave him. Black Cat was later returned to Earth along with the other heroes and villains, apart from Spider-Man.