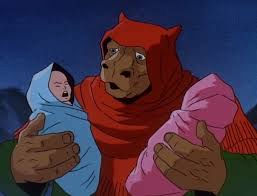 This is sixth episode of the fourth season of X-Men: The Animated Series.

At the X-Factor headquarters, Quicksilver is taking a call from Forge when the Scarlet Witch interrupts him and tells him that their father, Django Maximoff, is on his deathbed. The two go to visit Django and he reveals that he is not their father as he and Marya Maximoff adopted the two when they were babies. It is revealed that Bova Ayrshire, an Animorph, delivered the two babies to the Maximoff's and swore them to secrecy.

Django suggests that the twins find Bova to find out who their real parents are, while Quicksilver is sceptical of this sudden truth. At the X-Mansion, Magneto arrives and talks with Professor X. Magneto reveals how he heard that his wife, Magda, is apparently alive and living in the Balkans. He asks Xavier and the X-Men to check out the island for him. Xavier sends Wolverine to act as Magneto's bodyguard.

Elsewhere, Quicksilver and Scarlet Witch arrive at Mount Wundagore where they meet Bova and the High Evolutionary. Bova tells the twins how their mother, Magda, arrived at Mount Wundagore years ago, fleeing from a mutant who had destroyed their village. She gave birth to the mutant twins and then died. Hearing this, Quicksilver declares that he needs vengeance.

Magneto reaches the grave of his wife and is greeted by another of the Animorphs. The twins arrive and confront Magneto, thinking he had killed their mother. After tying up the mutant, Quicksilver and Scarlet Witch are attacked by the Animorph's and Wolverine arrives, aiding the mutants. All four mutants are gassed and taken back to Mount Wundagore to be imprisoned by the High Evolutionary. Once there, High Evolutionary announces that he plans on using the powers of Magneto's family to further his experiments, revealing that Quicksilver and Scarlet Witch are Magneto's children.

Using the all their powers, Wolverine is transformed into a large, wolf type monster. Professor X and Beast arrive in the Blackbird and help the mutants to break free. Wolverine's transformation is reversed and the twins reconcile with Magneto.