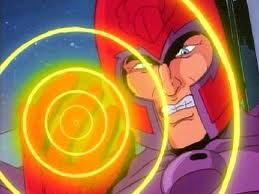 Erik Magnus Lehnsherr is also known as the mutant, Magneto.

When he was just a small boy, Erik's country was invaded by foreign troops during a war and Erik was forcefully separated from his parents. After the war, Erik began working in a psychiatric hospital where he first met Charles Xavier. The two became good friends and when soldiers came kidnapped Erik and Charles' patients and friend, the two teamed to rescue them, revealing to each other that they were mutants. However, Erik wanted to kill the soldiers for what they had done but Charles managed to stop him. Erik later left Charles, took up the alias 'Magneto' and managed to gain a group of mutant followers. Magneto and his group attacked human corporations and governments but Charles managed to defeat him. Magneto later met Xavier again when he clashed with the first incarnation of the X-Men. After this, Magneto hid himself from the public eye for many years. At some point, Magneto visited the Savage Land and made the Savage Land Mutates. Erik also married his wife, Magda Lehnsherr and became the father of Quicksilver, Scarlet Witch and Polaris. Magda would later die.

Magneto later resurfaced and attacked the Drake Missile Base, planning on using the missiles there to blow the base up but the X-Men stopped this plan. Magneto then attacked Metro Chemical and was defeated after Xavier forced his old friend to see painful childhood memories. After Senator Kelly was saved from an assassination attempt, Magneto kidnapped him and was about to kill him until a group of plastic Sentinels arrived and took Kelly, leaving Erik for dead. Erik and Xavier then managed to explode a rogue Master Mold after it planned to replace the leaders of the world's brains with computers.

Magneto and Xavier were later trapped in the Savage Land by former X-Man, Morph, without their powers and were forced to confront the Savage Land Mutates, which Magneto had abandoned years ago. The two were later rescued by the X-Men.

Magneto later constructed Asteroid M which was supposed to be a safe haven for mutants but it later had to be destroyed. Magneto later helped repel the Phalanx invasion after his son, Quicksilver, was threatened by the alien force. Pietro was later saved. When Apocalypse planned to change time, Magneto allied with the villain, thinking that he would bring back Erik's former wife, Magda but he turned against Apocalypse after he found out his real plan. After Charles was shot and critically injured, Magneto came to him and was present when Lilandra Neramani took his old friend to the Shi'ar Empire for treatment. It is then implied that Magneto joined the X-Men.

Magneto is seen leading the mutant rebellion against robots and the Avengers.

Magneto is known as 'Magnus the Magnificent', an evil sorcerer with an army of metal men. Magnus is defeated by Jubilee when she overloads his power through the 'MacTaggert Crystal'.