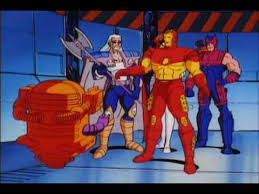 This is the sixth episode of the first season of Iron-Man: The Animated Series.

James Rhodes and Wanda Maximoff head off to Emerald Cove on a mission, taking out enemy vehicles along the way. At Emerald Cove, Alana Ulanova is in the middle of her photo-shoot when The Hand arrive and take over the beach. M.O.D.O.K. tells Mandarin to be wary of killing high-status celebrities, which draws the suspicion of Mandarin.

At Stark Enterprises, an alarm signals, telling Iron Man and Force Works that their is an intruder in the building. The intruder is revealed to be M.O.D.O.K. who wants a temporary truce with the heroes. Threatening to blow up the building, M.O.D.O.K. tells Force Works of The Hand's attack at Emerald Cove and that he wants the team to save the captives because Alana Ulanova is his wife.

M.O.D.O.K. reveals that both he and Red Ghost competed for the affections of Alana but when she chose M.O.D.O.K., Red Ghost mutated him into the form he is in now. Force Works agrees to go to Emerald Cove while Alana manages to escape The Hand but is soon recaptured.

James and Wanda arrive on the beach, with James changing into his War Machine armor. As the two heroes begin to fight the villains, the rest of Force Works arrives and Alana manages to escape again. The villains are defeated and forced to retreat.