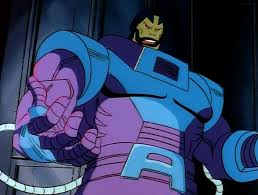 Apocalypse was born in Ancient Egypt and is believed to be the first mutant. He had lived for centuries before he met Mystique and helped to form the Brotherhood of Evil Mutants. Years later, he made Mystique capture mutants and turn them into his slaves. Four mutants were captured and made into the Horsemen of Apocalypse. Apocalypse used these horsemen to attack the world leaders until the X-Men intervened and stopped Apocalypse's plans. When on of the X-Men, Rogue, touched Archangel, the Horsemen of Death, she absorbed his mental conditioning and so this horsemen turned against Apocalypse. Later, he ordered the Brotherhood to assassinate Senator Kelly but this plan was foiled by the X-Men and Bishop.

Apocalypse later managed to infiltrate the anti-mutant group, Friends of Humanity, and used their facilities to create the Techno-Organic Virus although this virus was later destroyed by the X-Men, Bishop and Cable, who came from a future where Apocalypse ruled the world. Later, Apocalypse, posing as a scientist, gave Archangel false information about a weak point on the villain's neck. Apocalypse planned to kill his former Horseman but he failed in this mission and had to escape Archangel and the X-Men.

After Magneto's base, Asteroid M, was destroyed, Apocalypse rescued Magneto's follower, Fabian Cortez and made him his slave. Apocalypse later mastered time travel and used this new skill to gather all the psychics strong enough to kill him, and planned to eliminate them. This plan backfired due to the psychics being freed and they sent Apocalypse to the Astral Plane. Trapped in the other dimension, Apocalypse managed to contact Cortez and tried to use him to find a mutant to use to bring Apocalypse back into the real world. Cortez tried to use Caliban but when this plan failed, Apocalypse is seen inhabiting Cortez himself, therefore escaping the Astral Plane.

Apocalypse rules over this timeline and regularly fights Cable and his band of mutant rebels, known as Clan Chosen.