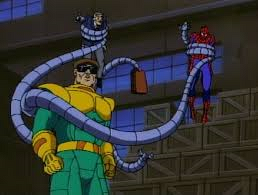 This is the sixth episode of the first season of Spider-Man: The Animated Series.

Spider-Man swings off to the home of Felicia Hardy as he has finally managed to get a date with her. Getting changed, Peter heads inside Felicia's mansion while outside, Doctor Octopus infiltrates the mansion's grounds. Peter is greeted by Felicia and when she goes to get a jacket, she is captured by Doctor Octopus who buries Peter under a pile of rubble. When Peter comes to he has trouble getting the F.B.I. agents to believe him when Anastasia Hardy arrives. She is shown a ransom note and recognizes the signature as Otto Octavius'.

Hearing the name, Peter thinks back to when he was a young boy and his Uncle Ben took him to Otto Octavius' Science Camp. It was Octavius who inspired Peter to take a further interest into the sciences.

As Spider-Man is swinging through the city looking for Dr. Octopus and Felicia, the two arrive at an abandoned warehouse. Octopus tells Felicia of how he came to the Hardy Foundation for money to fund his research but Anastasia soon cut the funds. Forced to work out of a basement without the proper safety procedures, Octavius was caught in a blast that fused him with his mechanical arms, creating Doctor Octopus.

J. Jonah Jameson gives a news broadcast aimed for Doctor Octopus, telling him that they are ready to meet his demands if he will them what they are. Doctor Octopus then rings them up and after a heated discussion, demands that Jameson bring the money personally.

Jameson arrives at the warehouse with Spider-Man secretly following him. Dr. Octopus confronts Jameson when Spider-Man arrives and attacks the villain. Being battered around Spider-Man is told that twice the amount of ransom money must be brought now that he has Jameson as well.

After some stern words from Anastasia and Robbie Robertson Spider-Man decides that maybe Peter Parker can help the situation.

At the Daily Bugle, Peter persuades everyone to let him deal with Doctor Octopus and manages to get the villain to agree to let him bring the ransom money.

In prison, Doctor Octopus declares that he will soon be freed.