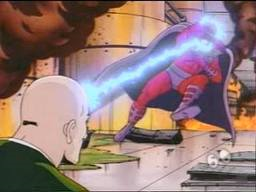 This is the fourth episode of the first season of X-Men: The Animated Series.

Charles Xavier is going through the mind of Sabretooth (who was brought to the Institute in the previous episode) and trying to help the savage mutant find the source of his anger. After the two team up to combat Sabretooth's inner demons, what is supposed to resemble Wolverine attacks and Sabretooth retreats into a part of his mind that Xavier can't access. Xavier believes that this part of the mind is causing Sabretooth's stress. It is then revealed that Sabretooth is actually tied down onto a bed in the mansion's infirmary.

Xavier then talks to Wolverine, Cyclops and Storm about Magneto's attack on the missile base (previous episode), how Magneto wants mutantkind to rule over humankind and the fact that he now sees the X-Men as enemies. Xavier then reveals his work into helping Sabretooth calm his stress and leads them into the meeting room where Sabretooth is bound to a chair. Wolverine demands that Sabretooth be taken away and threatens to attack him. Sabretooth and Wolverine then state how he and Wolverine used to work together and be friends until Creed killed some of Logan's friends for no reason. Wolverine then walks out of the room, refusing to be near his enemy. Xavier, letting Wolverine go, begins to talk about Magneto and how he will surely attack again due to his failure at the missile base.

Elsewhere, Magneto arrives at a chemical plant called 'Metro Chemical and begins to spill vats and cause explosions at the plant. Cerebro alerts Xavier of the attack and Xavier figures out that Magneto is challenging him by attacking the plant, due to the fact that many workers could be hurt. Xavier and the X-Men present (Cyclops, Storm and Rogue) go to the chemical plant, leaving Jubilee at the mansion to watch Sabretooth.

The X-Men arrive and start to fight the villain but Magneto, angered because he only wanted to face Xavier, easily beats the heroes. Xavier then appears and starts to confront Magneto. Rogue is battered aside, Cyclops is made unconscious by gas and Storm is buried under some rubble which sets off her claustrophobia. Rogue manages to get the unconscious Storm out of the rubble but then sees that Cyclops is not breathing. She performs CPR on him but as he starts to breathe again, Rogue starts firing the optic blasts that she absorbed from Cyclops. Cyclops then tells her to close her eyes to stop her from causing anymore damage to the plant.

Magneto gives Xavier one last chance to join his cause, which Xavier refuses to do and then proceeds to scold Magneto for his methods and the destruction he has caused. Magneto, fuelled by anger, tips Xavier out of his hoverchair and threatens to kill him until Xavier enters the villains mind, making him relive painful childhood memories. Magneto then retreats when Xavier refuses to stop his torment. The Professor then guides Rogue to him, who has been flying about the plant blindly, looking for him. He mentally guides Rogue out of the burning chemical plant, whilst she is carrying Storm and Cyclops. Just as Xavier and the X-Men escape the chemical plant, explodes and burns down.

Senator Kelly later holds a press conference, discussing the mutants attacks at the Mutant Control Agency (Night of the Sentinels Part 1 and Night of the Sentinels Part 2), Drake Missile Base (previous episode) and the Metro Chemcial plant earlier on. He criticises the President of the United States and announces that he is going to be a candidate in the upcoming election. He then announces his intention to put all mutants in internment camps. Henry Peter Gyrich watches Kelly's statement in the crowd. Back at the mansion, Jubilee and Sabretooth are watching this press conference and Sabretooth hurts his wrist on his strap after angrily reacting to Kelly's statements. Jubilee, feeling sorry for the mutant, losens his strap but then Sabretooth grabs her. He then reveals that he had been faking his improvements on his psyche and that Magneto sent him to find the school and take it over. Sabretooth forces Jubilee to unfasten his restraints and then he is about to kill her when Wolverine jumps into the room and attacks the feral mutant.

Sabretooth knocks Jubilee into a wall and then proceeds to attack Wolverine. The two fight and Wolverine is about to kill his arch enemy when Xavier arrives and stops him. Jubilee then says how Sabretooth was going to kill her and how he planned to take over the school. Sabretooth then jumps up and slashes Wolverine but then Jubilee blasts him through the wall. Sabretooth then retreats away from the mansion. Wolverine is taken to the infirmary and apologises to Wolverine for not listening to him.

Meanwhile, Magneto is overlooking the city and vows to raise an army of mutants to take over humanity and destroy Xavier.