Days of Future Past Part 1 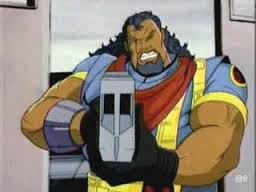 This is the eleventh episode of the first season of X-Men: The Animated Series.

In the year 2055, Sentinels have taken over a ruined world and mutants are hunting mutants for money. An old Logan is leading two other mutants across the ruins of New York when a couple of Sentinels ambush them. The mutants fight the robots until Bishop, a mutant tracker working for the Sentinels, arrives and helps to capture the three rebel mutants. The captured mutants are the escorted to the Mutant Termination Centre. On the way, Logan tries telling Bishop that the Sentinels want all mutants dead, not just rebels, but Bishop ignores this claim. A Sentinel tells Bishop that the tracker has finished his quota and so Bishop is captured along with the rebels, proving Logan's point. On the way, the mutants pass the graves of the X-Men. When they arrive at the Termination Centre, the mutants attack the Sentinels escorting them and Logan manages to take Bishop to see Forge. Forge explains how they were planning on using a transceiver, stolen from the Sentinels, to go back in time and stop the incident which lead to the Sentinels uprising from ever taking place. Logan was the first to volunteer but Bishop nominates himself and is chosen to go back in time. Just before Bishop leaves, the Sentinels and Nimrod attack the base.

Bishop at first thinks that the transceiver has failed but later realises that he is in fact back in the 1990s albeit he can't remember what he has to do. He sees a newspaper article about Charles Xavier and remembers that he has to see him. Elsewhere, Rogue and Gambit visit their team mate Beast in his jail cell. Beast explains how he has to go through with his sentence while Gambit shows his dislike of prisons, leading Beast to believe that Gambit has been imprisoned before.

Meanwhile, Bishop remembers that he has to stop an assassin and thinks that the X-Men are the assassins and so he hijacks a bus and starts driving towards Xavier's Institute, guided by his transceiver along the way. Jubilee is checking the security cameras when she sees Bishop ram his bus through the mansion front gates and up towards the mansion. She alerts Cyclops and Storm about the intruder but soon after, Bishop crashes the bus through the mansion's wall. Cyclops and Storm arrive at the crash site and soon the three mutants begin fighting. Jubilee and Wolverine join in as Bishop begins to say that he is from the future but Xavier breaks up the fight and reads Bishop's mind. He believes that Bishop is telling the truth but the other X-Men aren't so quick to believe this story.

Whilst talking with the X-Men, Bishop's transceiver warns him that something else have travelled from his time to the X-Men's present. The X-Men and Bishop investigate the site of the time travel and soon find the super Sentinel, Nimrod, who attacks the group. The whole team try to defeat Nimrod but they fail until Storm manages to freeze the robot and the team then manage to smash it up into pieces. Nimrod begins to reassemble itself though so Bishop destroys it's transceiver, sending it back to the future.

The X-Men and Bishop go back to the mansion when Rogue and Gambit arrive from visiting Beast. Bishop is asked if he remembers who the assassin is yet to which Bishop replies that he does and pulls his gun out and aims it towards Gambit and fires.