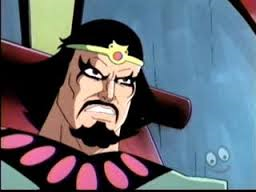 D'Ken Neramani was the corrupt Emperor of the Shi'ar Empire.

During his time as the Emperor of the Shi'ar, D'Ken used his power and influence to search for the M'Kraan Crystal, an object with great power and potential and what D'Ken thought would allow him to become a God. When his sister, Lilandra Neramani, opposed him, D'Ken cast her out as an outlaw and vowed to imprison her. Lilandra escaped, with the crystal, and D'Ken sent Erik the Red and the Shi'ar Imperial Guard to capture her. After dealing with the Starjammers, Lilandra and the X-Men, D'Ken obtained the crystal and used its power to transport himself and those around him into the crystal. D'Ken's abuse of this power lead to vast troubles on Earth and eventually, the Phoenix Force, which had possessed Jean Grey, flew itself and the crystal into the Sun, destroying the crystal and D'Ken with it.