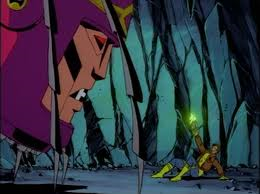 This is the twenty fourth episode of the third season of X-Men: The Animated Series.

At the Muir Island Research Centre, Moira MacTaggert is giving Morph a once-over, before he can join the X-Men again, having received therapy from coming back from the dead and being a mind controlled henchman of Mister Sinister. Morph assures Moira that he is fine. Elsewhere, at a manufacturing plant, a group of Sentinels attack and steal a newly developed, highly durable polymer. At the X-Mansion, the X-Men welcome back Morph but before they can celebrate they are alerted of the Sentinels attack. They set off, Morph included.

Sensing the Sentinels, Wolverine suggests that they retreat as he is worried that if Morph sees the giant robots who almost killed him, it might trigger his post traumatic stress disorder. Inside the Sentinels underground base, Master Mold, who is now reduced to just his head, states how he will use the polymer his Sentinels stole to create himself a new body. Master Mold orders the Sentinels to capture Professor X, Henry Peter Gyrich and Bolivar Trask. The Professor, who is with the X-Men, is captured by the Sentinels, as Morph was frozen in fear. The rest of the team fight some Sentinels and learn where their next location is.

Elsewhere, in a jungle, Gyrich and Trask, who have gone into hiding, are attacked by the Sentinels and, despite the intervention of the X-Men, they too are captured. Morph, who was taken back to the mansion, decides to do some more hacking into the Sentinel's database and finds out the location of the Sentinels base. He then flies off to meet up with the team.

At the underground base, Master Mold explains how he wants Gyrich and Trask to build him his new body and he wants to take Xavier's telepathic powers from him. Before any of that can happen, the X-Men arrive and fight the Sentinels. The fight goes badly until Morph arrives and he uses his shape-shifting powers to fight the robotic villains. Master Mold manages to gain the upper hand and is about to kill Morph before a stalactite falls on it and destroys it completely. Trask sacrifices himself and blows up the base, with himself and the Sentinels in it and the X-Men, Gyrich and Morph manage to escape. Morph decides that he actually isn't ready to re-join the team yet and so he sets out on his own.