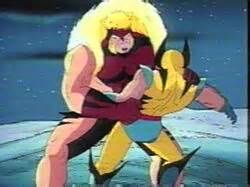 This is the sixth episode of the first season of X-Men: The Animated Series.

After Wolverine had left the mansion in the previous episode, Cyclops is angry with his teammate for leaving but Jean Grey realises he has left because of his feelings towards her.

Logan was travelling across Northern Canada when he realises that Sabretooth has been tracking him, looking for revenge after their previous encounter in Deadly Reunions. Sabretooth knocks Wolverine off a cliff into the icy water below where Logan manages to cling onto a nearby block of ice. Sabretooth shouts after Wolverine saying that he will die but Sabretooth will come looking for his body just so he can bury it.

Back at the mansion, Gambit tells his teammates of an island, that caters only to mutants, called Genosha. He suggest that the team investigate Genosha but Cyclops says that Gambit only wants to lie around on a beach. However, Professor X says that a holiday could be good for them and sends Gambit, Storm and Jubilee to the island.

Meanwhile, Wolverine is saved from the ice by an Inuit group and is taken back to their village to heal. Logan wakes up in the village elder's tent who is surprised by Wolverine's fast healing. Logan insists that he do some work in the village to repay their kindness and goes fishing with some of the Inuit, who are surprised by Logan's strength. Logan starts to feel happy in the village, feeling 'at peace' as he puts it. However, one of the Inuit, Kiyoek, becomes jealous of Wolverine's sudden popularity and wanders from away from the village until he meets Sabretooth. Sabretooth reveals that both he and Wolverine are mutants and tells the Inuit to do as he says if he wants Wolverine out of his village.

Gambit, Storm and Jubilee arrive at Genosha and check into their hotel. The desk clerk at the hotel uses his computer to see that the three are mutants and assigns them to one of their bungalows.

Kiyoek, takes Wolverine away from the village on a hunting trip. However, while they are gone, Sabretooth attacks the village, sets it on fire and kidnaps the inhabitants. When Wolverine and Kiyoek get back, they see what has happened and Wolverine figures out that his arch enemy was behind the attack and vows to hunt him down. Kiyoek, who did not expect Sabretooth to attack his village, follows Wolverine, wishing to redeem himself. The two then find Sabretooth and the villagers who have been tied to an ice bridge rigged to explode. The two mutants fight but Sabretooth manages to gain the upper hand until Kiyoek steps in and manages to buy Wolverine enough time to recover. Wolverine then dodges Sabretooth's charge so that he falls into the pit below. Kiyoek and Wolverine then untie the villagers and save them from the dynamite. The villagers then have to move to the city due to their village being burned down.

That night, Gambit, Storm and Jubilee are resting in their accommodation on Genosha when they are gassed out. A Sentinel then captures the three mutants.