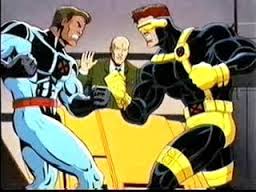 This is the eleventh episode of the third season of X-Men: The Animated Series.

Iceman is breaking into a government facility when Professor X is alerted to this. He sends his X-Men to apprehend their former team mate and, on the way, they discuss Iceman's attitude with the team. Arriving at the facility, the team manage to subdue Iceman and bring him back to the mansion, where he is placed in a detention cell. Iceman tells Beast that he had left the X-Men because his then-girlfriend, Polaris was injured on a mission. Polaris left with him and the two were living together until Iceman found his house ransacked and Polaris gone. Iceman tracks her down to the government facility where the X-Men captured him.

Jubilee, feeling sorry for Iceman, frees him and together they go back to the facility, looking for Polaris. Once there, they are knocked out by X-Factor. The X-Men arrive looking for Iceman and Jubilee and, who they find after they have woken up and broken free from their bonds. The group encounter X-Factor again and Forge reveals that the facility is his team's training grounds, sponsored by the government. Polaris tells Iceman that she secretly joined the team and has fallen in love with Havok. The X-Men and Iceman return to the mansion and Professor X convinces Iceman to return to the team but he declines the offer and leaves.