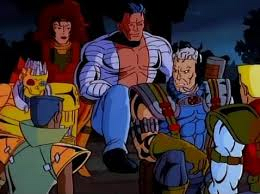 Clan Chosen are a group of rebels, from the Age of Apocalypse timeline, who oppose the rule of the evil mutant.

Lead by Cable, Clan Chosen were first being trapped in the temporal storm that ravaged their timeline. Cable went back in time to reverse the storm's effects and save his native world. Later, Clan Chosen were seen trying to prevent their arch nemesis, Apocalypse from acquiring ultimate power from his Lazarus Chamber. The tyrant was defeated.