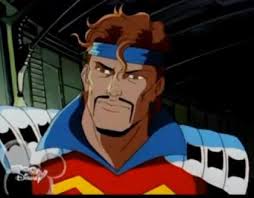 Christopher Summers is also known as the Starjammers leader, Corsair.

While piloting a plane alongside his wife Katherine Summers and his two boys Scott Summers and Alexander Summers, Christopher was attacked by a Shi'ar force. He sent Scott and Alex out the plane, sharing a parachute, while he and Katherine were captured. Katherine was killed and Christopher managed to escape, taking the name 'Corsair' and joining the Starjammers. Whilst with the Starjammers, Corsair first met the X-Men and kidnapped Cyclops, who, unknown to Corsair, was his son Scott, and stole the M'Kraan Crystal from Lilandra Neramani. Corsair planned to set up a meeting with D'Ken Neramani but double cross him at the last minute. this plan backfired when D'Ken got the crystal and everyone was pulled inside it. The Phoenix Force later saved everyone, including Corsair.

After taking the Shi'ar girl Jandra, Corsair and the Starjammers crashed on Earth, where he found Cyclops and Storm. Corsair got their help and he realised that Cyclops was his son, Scott. After their reunion, Corsair helped to fight off Commander Raknar and left to adventure in space with the Starjammers once again.