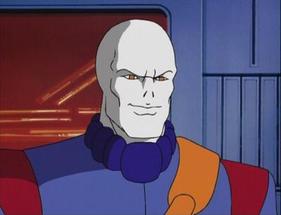 Chameleon is a hired assassin and master of disguise.

When he was just a small boy, Chameleon was taken in by the Red Skull, who gave the infant his image inducer. After Red Skull was sealed in a vortex in World War Two, Chameleon went on to become a hired assassin.

Decades later, Chameleon was hired by terrorists to assassinate the world leaders at a peace treaty signing at New York. This attracted the attention of S.H.I.E.L.D. who tried to hunt down Chameleon. With some help from an unsuspecting Spider-Man, Chameleon was able to evade the approaching S.H.I.E.L.D. troops. Later, Chameleon was able to infiltrate the Daily Bugle and steal the security details for J. Jonah Jameson's party, which the world leaders were attending. Trying to sneak into the party, Chameleon caught the attention of both S.H.I.E.L.D. and Spider-Man. Eventually, Chameleon was chased down in a helicopter and crashed into the river. The next day, Spider-Man was easily able to locate Chameleon at the peace treaty signing, as the villain had took the form of Peter Parker, and so he was brought into custody.

Sometime after, Chameleon (along with Doctor Octopus, Mysterio, Rhino, Scorpion and Shocker) was broken out of jail by the Kingpin. In return the villains formed the Insidious Six a group of villains under the employ of the Kingpin and hired to take down Spider-Man and all of Kingpin's criminal rivals. Eventually, the team was stopped by Spider-Man and the members went their separate ways.

Under the employ of Richard Fisk, Kingpin's son, Chameleon managed to frame Peter Parker for stealing top secret information. However, with the help of Daredevil, Peter was able to clear his name and so both Richard and Chameleon were put in prison.

Herbert Landon later implanted a techno-organic virus in the Chameleon, allowing him to change disguises without the use of his image device. Chameleon used this new ability to break John Hardesky out of S.H.I.E.L.D. custody.

Chameleon later joined the reformed Insidious Six, with the new addition of Vulture, to help Kingpin locate the Red Skull's doomsday device. However, Chameleon betrayed the team when his stepfather returned from the vortex he was trapped from and teamed with him and his step-brother, Rheinholt Kragov. Fighting against Kingpin, the Insidious Six, Spider-Man and the Six Forgotten Warriors (including the newly returned Captain America, Chameleon and Red Skull were betrayed by Rheinholt when he was transformed into 'Electro'. During the subsequent fight, Chameleon escaped.