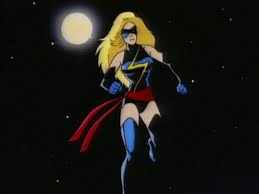 Carol Danvers is also known as the super-heroine, Ms. Marvel.

At some point in her life, Carol gained super powers and took on the mantle of Ms. Marvel. She fought the Brotherhood of Evil Mutants constantly until she first encountered their newest member, Rogue. Whilst trying to fly a jet, Rogue used her absorption powers on Danvers and put her body into a coma as well as permanently gaining the heroines powers and a copy of consciousness. Danvers began to plague Rogue's mind and cause her great distress until Rogue met Professor X and he blocked her knowledge of Danvers and kept the copy of her consciousness sealed away in her mind.

Years later, thanks to some manipulation from Mystique, Rogue unwittingly released the copy of Danvers in her mind and became tortured by her once more. Jean Grey was able to temporarily supress Danvers and Rogue went to the hospital where Danvers body was. She touched Carol, transferring her consciousness back to her body and after Rogue left, her brainwaves became active and she started to smile in her coma.