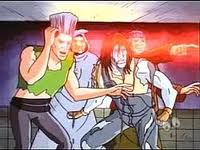 This is the fifth episode of the first season of X-Men: The Animated Series.

The X-Men are training in the danger room with Cyclops and Professor X supervising. Storm has a panic attack, magnified by her mutant powers, after the walls and ceiling close in on her, triggering her calustraphobia. After this, she expresses her desire to not lead the team. Jean Grey then visits Wolverine in his room to see if he is recuperating well from Sabretooth's attack (previous episode) but finds that he is instead excerising. After a brief moment of tension between the two, Jean says that Cyclops is waiting for her and after she's gone, Wolverine says that he's waiting for her.

Scott and Jean are in their civilian clothes and go to see the Phantom of the Opera. Afterward, they witness a small mutant boy, Leech still some fruit and then being chased by an angry human mob. Leech runs down to the subway and meets with the Morlocks, who attack the humans. Scott and Jean defend the mob but they are knocked out and taken, along with the humans, to the Morlocks base.

Scott later wakes up, noticing that he is tied down and his ruby quartz glasses have been taken off but his powers are not working. Leech says that he has took them away as a thank you for saving him earlier. Scott is then taken to Callisto who states that she is the leader of the Morlocks and that they are mutants who are too physically deformed to live on the surface with humans. Callisto then says that she wants Scott to produce her an heir. Scott refuses this and demands to see Jean, who has been chained up. Jean manages to briefly break free and send a telepathic message to Xavier, before she is captured again.

Xavier then sends the other X-Men, apart from Jubilee to rescue Scott and Jean. When they arrive, the X-Men are ambushed by the Morlocks but they manage to escape by crawling through a tunnel. Both Rogue and Gambit are considered about Storm due to her claustrophobia and her being in a confined space, but she says she is fine. But when the are faced with narrower gaps, Wolverine insists that Storm be allowed to ask for help.

The small group find Jean, who has been brainwashed into thinking that she is the daughter of Annalee. Wolverine manages to scare away Annalee and Jean snaps back to her senses. They later find Callisto and Scott and it appears that Scott has been killed. However, Wolverine deduces that the supposed body of Scott is not real and it turns out it is the shape-shifting Morlock, Ape. The X-Men then fight the Morlocks and are winning the fight until Plague gives Gambit a fever and Rogue has to take him back to the mansion. Wolverine, while chasing Callisto, finds Scott. He quickly thinks of getting rid of Scott so he could be with Jean but he can't bear the thought of making Jean upset. Callisto overhears Wolverine and finds out that he is in love with Jean. When Wolverine and Scott, find Storm and Jean, Annalee tries to brainwash Wolverine into killing Scott but Jean Grey manages to defeat Annalee and so Wolverine doesn't go through with it.

Storm then finds Callisto and challenges her for leadership of Morlocks. The two agree not to use their mutant powers and begin fighting. Storm wins and offers the Morlocks to come with them to Xavier's mansion. They refuse and Storm declares that Callisto shall rule in her absence. The X-Men then get back to the mansion where Gambit is fully recovered and Storm is congratulated on her success in the mission. Scott and Jean go to thank Logan but find that he has left the mansion.