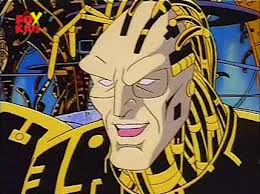 Cameron Hodge was a lawyer and later, one of the benefactors of Genosha before he became a cyborg.

Cameron Hodge at first was a lawyer to Beast in his trial to gain bail and claimed that the only reason that Beast was refused bail was because he was a mutant. The judge of the trial stated that he was not prejudiced but did not grant bail due to the violence of the X-Men's attack on the Mutant Control Agency, where Beast was arrested, and the breakout attempt by Magneto.

Hodge was later seen on Genosha as one of the humans in charge of the island alongside the Leader, Henry Peter Gyrich and Bolivar Trask. Hodge and the Leader was pursued by Cable but all three were later washed away by a tidal wave caused from the destroyed dam. It was later revealed that Hodge survived the tidal wave but had lost an arm and a leg.

Bitter, Hodge met up and joined with the alien Phalanx who gave him cybernetic limbs with the promise of Hodge helping them assimilate Earth and its inhabitants in return. Hodge was opposed by Beast, Magneto, Mister Sinister, Forge, Amelia Voght and Warlock. The Phalanx were defeated and fled while Hodge was captured.