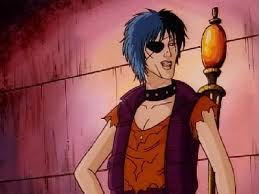 Callisto is the leader of the Morlocks.

Callisto is seen as part of the mutant rebellion.