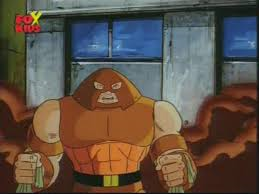 Cain Marko is also known as the mystically powered, Juggernaut.

When his father, Kurt Marko, married Sharon Xavier, Cain became the step-brother to Charles Xavier. Cain hated Charles due to the fact that Kurt preferred his step-son to his real son. Cain was sent off to military school by his father, which lead Cain to pursue a military career. During his time in the military, Cain found the Crimson Gem of Cytorrak and it gave Cain the power of the Juggernaut.

As the Juggernaut, Cain attempted to kill Charles by destroying his mansion. When he found that Xavier wasn't in his mansion, Cain began robbing banks to get his step-brother's attention. However, he was attacked by the X-Men and Colossus and was eventually defeated when the heroes managed to remove Juggernaut's helmet and Jean Grey was able to psychically attack the villain.

Juggernaut later arrived at Muir Island with Black Tom Cassidy but they were defeated by Shi'ar Imperial Guardsman, Gladiator. The X-Men later managed to save Juggernaut's life when he was critically ill, due to Eugene Turbot Weiderspan taking the Crimson Gem of Cytorrak and the power of the Juggernaut away from Cain. The power was eventually transferred back to Cain.