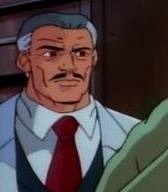 Bolivar Trask was the person who designed and invented the Sentinels.

Bolivar Trask was anti-mutant like his colleague, Henry Peter Gyrich, and together they both designed the Sentinels to track down and capture mutants. After the X-Men destroyed their first Sentinel factory and the President of the United States outlawed the program, Trask and Gyrich moved to Genosha where they allied with Cameron Hodge and the Leader. Trask then created Master Mold, a giant Sentinel producer, along with other Sentinels to capture mutants and imprison them, forcing them to build a dam to power Master Mold. This operation was terminated when the X-Men and Cable destroyed the factory, freed the prisoners and destroyed the dam. Trask later moved back to America where Master Mold usurped control from him and turned the Sentinels rogue. The X-Men and Magneto managed to seemingly destroy Master Mold and halted its plans. Trask later showed up and sacrificed himself to destroy the remains of Master Mold and the Sentinels.