Beyond Good and Evil Part 4: End and Beginning 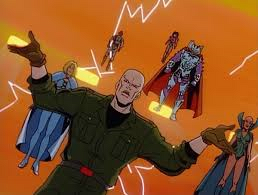 This is the fifteenth and final episode of the fourth season of X-Men: The Animated Series.

As Bishop and Bender continue to watch events from the Axis of Time, the X-Men continue fighting n Ancient Egypt. Having lost Professor X and Wolverine to Apocalypse, Cable throws a grenade at the villain's 'Lazarus Chamber', destroying it. However, Apocalypse reveals how he is being sustained by the Axis of Time now and so doesn't need the chamber anymore.

Professor X, encased in the Axis of Time along with the other captive psychcis, manages to discreetly set off a homing device that alerts the X-Men to his location. Apocalypse reveals his plan to use the gathered power of the psychics to recreate the universe in his image. The villain starts sending out the imprisoned psychics up to a column of light while Bishop watches from a distance. Having a change of heart, Magneto and Mystique turn against Apocalypse. Momentarily gaining the advantage, Magneto decides that he will recreate the universe instead but both he and Mystique are defeated by Mister Sinister and the Nasty Boys.

Magneto frees Wolverine in an attempt to defeat Apocalypse but they too are defeated. Cable manages to arrive at the Axis, following Xavier's signal but he is knocked out by Apocalypse. As periods in history start to blink out of existence, Bishop tries to shoot the tubes containing the psychics. He frees Psylocke and starts to free the others, which disrupts the time erasing energies. Wolverine and Mister Sinister fight in the castle, accidentally destroying machinery and making Apocalypse's plan fail.

The Axis of Time starts to collapse on itself and the psychics, now all freed, use their combined powers to trap Apocalypse in the real world, without sustenance from the Lazarus Chamber. Bishop, Shard and Cable all return to their normal times and the X-Men return home. After everyone has left, Bender reveals himself to be Immortus and starts to rebuild the Axis of Time.